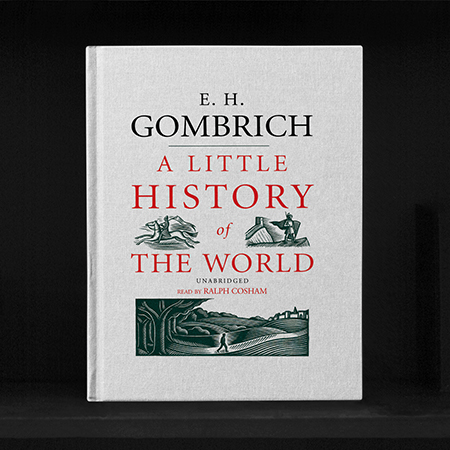 A Little History of the World

- Excerpt from A Little History of the World

Written originally as a way to get children interested in history, Ernst H. Gombrich’s best-selling novel, A Little History of the World was published in German in 1936. Gombrich, only 26 at the time he wrote it, tells an accessible tale of mankind’s journey from the Stone Age to the First World War, focusing on the greater impact of human experience rather than paying meticulous attention to detail. Gombrich would not permit anyone to professionally translate his work into English, his second language. He reserved this project for himself, insisting that he was the only one who could do it properly. At the end of his life, he was rewriting his little history into English when he died in 2001, at age 92.

Ernst H. Gombrich not only gave children a gift with A Little History of the World, but his whimsical take on humanity allowed anyone who reads his words in any language a chance to see the world from a child’s eyes. Not only did he pour his German heart into the novel, because he was bilingual he was able to put that same amount of love into the English version as his last gift to the world before his passing. Thanks to Gombrich and his collaborators for spreading “A Little History” all around the globe.

A Little History of the World in numbers: