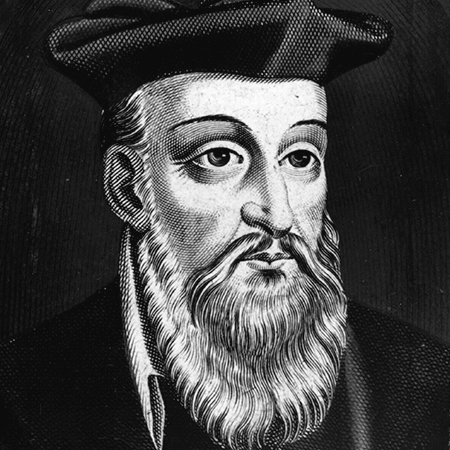 THE MISTRANSLATION OF THE MYSTICAL NOSTRADAMUS

“Indeed, the hereditary gift of prophecy will go to the grave with me.”
- Nostradamus

Nostradamus was a widely disputed French physician, astrologer, scholar, sorcerer, and fraud. Growing up wealthy and honored in the French court of Henry II, Nostradamus was said to be in service of queen Catherine de Medici. Best known contemporarily for his book Les Propheties, which supposedly predicts future events, Nostradamus’s credibility has been widely debated for centuries. His book is credited by a large number of supporters and the popular press with having accurately predicted many world events. However, with the many languages his predictions are read in today, what truth is to be taken seriously and what was lost in translation?

There isn’t much to confirm by way of facts with Nostradamus. With all the mistranslation, mysticism and thought-provoking prophecy, the Middle French astrologer seems to be nothing more than a poetic phenomenon who has shocked the world with the ability to predict coincidence. Nostradamus proves to be interesting when considering the importance of high-quality translation, and is, yet another, victim of the opposite.